You might think that Danaylov’s complaint is that I use the wrong social science, one biased too far toward libertarian conclusions. But in fact his complaint seems to be mainly against the very idea of social science: an ability to predict social outcomes. He apparently argues that since 1) future social outcomes depend in many billions of individual choices, 2) ethical and political considerations are relevant to such choices, and 3) humans have free will to be influenced by such considerations in making their choices, that therefore 4) it should be impossible to predict future social outcomes at a rate better than random chance.

For example, if allowing some [emulated minds to run on faster computers] than others might offend common ethical ideals of equality, it must be impossible to predict that this will actually happen. While one might be able to use physics to predict the future paths of bouncing billiard balls, as soon as a human will free will enters the picture making a choice where ethics is relevant, all must fade into an opaque cloud of possibilities; no predictions are possible.

Now I haven’t viewed them, but I find it extremely hard to believe that out of 90 interviews on the future, Danaylov has always vigorously complained whenever anyone even implicitly suggested that they could any better than random chance in guessing future outcomes in any context influenced by a human choice where ethics or politics might have been relevant. I’m in fact pretty sure he must have nodded in agreement with many explicit forecasts. So why complain more about me then?

It seems to me that the real complaint here is that I forecast that human choices will in fact result in outcomes that violate the ethical principles Danaylov holds dear. He objects much more to my predicting a future of more inequality than if I had predicted a future of more equality. That is, I’m guessing he mostly approves of idealistic, and disapproves of cynical, predictions. Social science must be impossible if it would predict non-idealistic outcomes, because, well, just because.

if there is one thing that has been established by the science of quantum mechanics, it is the fact that ‘materialism’ must be abandoned as a viable metaphysical position. In fact, the belief in the existence of solid material stuff which exists completely independent of mind is now about as scientifically acceptable as the phlogiston theory of heat.3

Statistical significance is not a worthless concept

In 2009, I read and enjoyed Stephen Ziliak's and Deirdre McCloskey's important book The Cult of Statistical Significance, and in 2010 my review of it appeared in the Notices of the American Mathematical Society. In the hope of engaging Ziliak and McCloskey in some further discussion, I write the present blog post in English; readers looking for a gentle introduction in Swedish to statistical hypothesis testing and statistical significance may instead consult an earlier blog post of mine.
In Ziliak's and McCloskey's recent contribution to Econ Journal Watch, we find the following passage:

In several dozen journal reviews and in comments we have received—from, for example, four Nobel laureates, the statistician Dennis Lindley (2012), the mathematician Olle Häggström (2010), the sociologist Steve Fuller (2008), and the historian Theodore Porter (2008)—no one [...] has tried to defend null hypothesis significance testing.

This surprised me, not so much because I had never expected to be cited in the same sentence as the fully fledged relativist provocateur Steve Fuller, but mainly because Häggström (2010)—which contains the passage

The Cult of Statistical Significance is written in an entertaining and polemical style. Sometimes the authors push their position a bit far, such as when they ask themselves: "If null-hypothesis significance testing is as idiotic as we and its other critics have so long believed, how on earth has it survived?" (p. 240). Granted, the single-minded focus on statistical significance that they label sizeless science is bad practice. Still, to throw out the use of significance tests would be a mistake, considering how often it is a crucial tool for concluding with confidence that what we see really is a pattern, as opposed to just noise. For a data set to provide reasonable evidence of an important deviation from the null hypothesis, we typically need both statistical and subject-matter significance

—is such an extraordinarily odd reference to put forth in support of the statement that "no one has tried to defend null hypothesis significance testing". Ziliak and McCloskey are of course free to be unimpressed by this passage and not consider it to qualify as a defense of statistical significance testing, but note that they write "no one has tried to defend" rather than just "no one has defended". Hence, they do not even grant my passage the status of a valid attempt at defending significance testing. This strikes me as overly harsh.
Let me take this opportunity to expand a bit, by means of a simple example, on my claim that in order to establish "reasonable evidence of an important deviation from the null hypothesis, we typically need both statistical and subject-matter significance". Assume that the producer of the soft drink Percy-Cola has carried out a study in which subjects have been blindly exposed to one mug of Percy-Cola and one mug of Crazy-Cola (in randomized order), and asked to indicate which of them tastes better. Assume furthermore that 75% of subjects prefer the mug containing Percy-Cola, while only 25% prefer the one with Crazy-Cola. How impressed should we be by this?
This depends on how large the study is. Compare the two cases

(a) out of a total of 4 subjects, 3 preferred Percy-Cola,

If we follow Ziliak's and McCloskey's advice to ignore statistical significance and focus instead purely on subject-matter (i.e., in this case, gastronomical) significance, then the two cases are indistinguishable, because in both cases the data indicates that 75% of subjects prefer Percy-Cola, which in subject-matter terms is quite a substantial deviation from the 50% we would expect in case neither of the liquids tasted any better than the other. Still, there is good reason to be more convinced of the superiority of Percy-Cola in case (b) than in case (a). The core reason for this is that under the null hypothesis that both drinks taste equally good (or bad), the probability of getting an outcome at least as favorable to Percy-Cola as the one we actually got turns out to be 5/16 ≈ 0.31 in case (a), while in case (b) the probability turns out to be about 6.7⋅10-59. These numbers (0.31 and 6.7⋅10-59, respectively) are precisely what is known in the theory of significance testing as the p-values for rejecting the null hypothesis. 0.31 is a really lousy p-value, meaning that in view of the data in (a) it is still fully plausible to suppose that the drinks are equally good (or even that Crazy-Cola is a bit better). On the other hand, 6.7⋅10-59 is an extremely good p-value, so in case (b) we may safely conclude that Percy-Cola really does taste better (in the sense of being preferred by a majority of the population from which subjects have been sampled). In other words, case (b) exhibits much better statistical significance than case (a).
Statistical significance is a useful way of quantifying how convinced we should be that an observed effect is real and not just a statistical fluctuation. Ziliak and McCloskey argue at length in their book that statistical significance has often been misused in many fields, and in this they are right. But they are wrong when they suggest that the concept is worthless and should be discarded.
Edit, March 4, 2015: Somewhat belatedly, and thanks to the kind remark by Mark Dehaven in the comments section below, I have realized that my sentence "Statistical significance is a useful way of quantifying how convinced we should be that an observed effect is real and not just a statistical fluctuation" in the last paragraph does not accurately reflect my view - neither my view now, nor the one I had two years ago. It is hard for me to understand now how I could have written such a thing, but my best guess is that it must have been written in a haste. Statistical significance and p-values do not quantify "how convinced we should be", because there may be so much else, beyond the data set presently at hand, that ought to influence how convinced or not we should be. Instead of the unfortunate sentence, I'd prefer to say that "Statistical significance and p-values provide, as a first approximation, an indication of how strongly the data set in itself constitutes evidence against the null hypothesis (provided the various implicit and explicit model assumptions correctly represent reality)".
Upplagd av Olle Häggström kl. 18:15 13 kommentarer: 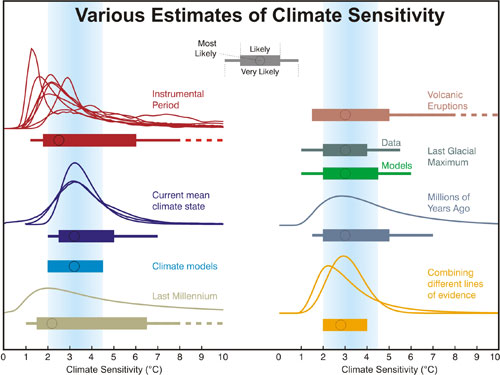 There is also a significant red flag in the press release for this study:

"When the researchers at CICERO and the Norwegian Computing Center applied their model and statistics to analyse temperature readings from the air and ocean for the period ending in 2000, they found that climate sensitivity to a doubling of atmospheric CO2 concentration will most likely be 3.7°C, which is somewhat higher than the IPCC prognosis.

But the researchers were surprised when they entered temperatures and other data from the decade 2000-2010 into the model; climate sensitivity was greatly reduced to a “mere” 1.9°C."

Including an extra decade's worth of data into the model should not halve their equilibrium climate sensitivity value, because the equilibrium sensitivity of the climate system is a relatively constant number, and in reality has not changed radically over the past decade. This suggests that their model may be overfitting the short-term natural variability.