That chess is simultaneously art, science and sport is an oft-repeated claim with a great deal of truth in it. In my two recent blog posts about the recent world championship match in which the young Norwegian chess genius Magnus Carlsen defeated reigning champion Viswanathan Anand, I emphasized the sports aspect of chess. To make up for this one-sidedness, I am happy to publish the following guest post, in which my friend and colleague Johan Wästlund (known to regular readers of this blog from the posts Back to basics and Om schack och matematik) demonstrates some more artistic aspects of the game.
I am sure most readers know that the rules of chess allows a player whose pawn reaches the eighth and final rank to promote the pawn to a queen. What perhaps not all of you know is that the player may alternatively choose to promote the pawn to one of the lesser pieces: rook, bishop or knight. Doing so may sound silly, because the queen is known as the strongest piece, and indeed such minor promotions occur only rarely in tournament chess, but there are exceptional situations where they make good sense. Please enjoy Johan's exploration of some of these cases! /OH
* * *
A remarkable pawn promotion
Johan Wästlund
The evening's first batch of coffee was almost ready, and in the thirsty crowd, T had found a victim. After a course for aspiring tournament referees, he now knew everything about "insufficient material". B, who felt he knew how the pieces move, found himself listening to a lecture about the rules of chess.
"So you mean", said B with a slightly disturbed but still amused voice, "that if my flag falls in an ending King + Bishop versus King + Bishop, then with bishops of the same color the game is drawn, but with opposite colors, I lose?"
"That's right, same color is insufficient material, you can't construct a sequence of legal moves leading to checkmate."
"But with opposite colored bishops, I could in theory put my king in a corner of the color of my opponent's bishop, and block one of the flight squares with mine. Like this." He quickly set up the following position on one of the analysis boards: 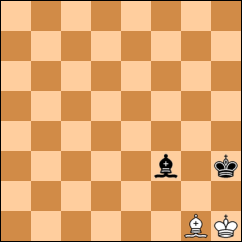 "Because of that possibility, if my flag falls I have lost the game. That's ridiculous!" T went on with the other endings of one piece each, knight against knight, bishop or rook, bishop against rook (where it turns out the bishop can't win).
"You also lose with a pawn against a piece", he continued, unable to conceal his excitement.
"Aha, because I could promote to a knight or maybe a bishop, and then corner my king. That's the silliest use of under-promotion I've ever heard of!"
The moment he pronounced the word "under-promotion", the problemist G entered the discussion. G's favorite topic was helpmates, but under-promotion would do.
"In fact there are only two possible motives for promotion to bishop or rook", he explained, "at least if one excludes things like ridiculing one's opponent. One is offensive, to avoid stalemating the opponent in a winning position. The other is defensive, to draw by getting stalemated. You see, except when it comes to stalemate, a queen will be at least as good as a rook or a bishop." He showed them a rare example of a serious under-promotion, the famous game Bremel - Kertis, Budapest 1948: 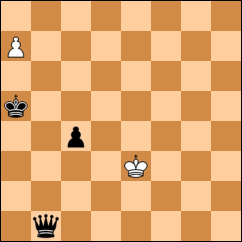 "In this position, White won with 1. a8R+! Kb4, 2. Rb8+ Kc3 3. Rxb1. If the rook had been a queen, Black would have been stalemated at this point."
"The defensive motive, getting oneself stalemeted, is even more exotic. It's been demonstrated numerous times in problems and studies, like this one by Traxler and Dedrle from 1909:" 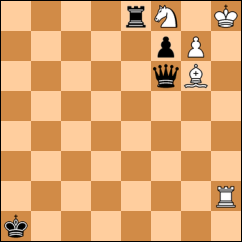 "White draws with 1. Ra2+ Kxa2 2. Bxf7+ Qxf7 3. g8B! Rxf8 stalemate. But the defensive under-promotion is a unicorn of chess. Easy to imagine, yet nobody has seen a real one! Amazing, isn't it? Not a single defensive under-promotion is known from the millions of recorded games of chess history."
"The most spectacular demonstrations of under-promotion are the realizations of the so-called Babson theme..."
And here he was interrupted by P, who reminded everyone that it was six o'clock and the games were about to start. It turned out that B was playing white against T. Their game became the longest of the evening, and when it was about to be decided, a small crowd had gathered in silence around the table. Black would clearly queen first, but his other race, that agianst the clock, was less certain. 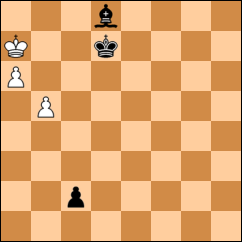 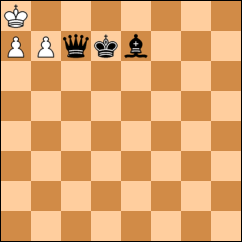 With only seconds left for the entire game, T was jumping up and down in his chair. How could it be so difficult to finish the opponent off with queen and bishop against a couple of silly pawns? He finally sighed and realized he might have to settle for a draw. With a helpless look on his face, he took a last glance at the clock, 3, 2, 1 second left. And played 66. - Qc8+.
Only at this point did B realize he might actually promote one of his pawns. With his last move, Black was clearly offering a draw, but the gentleman he was, B would still not miss an opportunity of a little prank. He reached out for the white queen, but with his eyes still focused on the board, accidentally pushed her over the edge of the table. She bounced through the little crowd and disappeared under a chair.
Never mind. For the desired effect, the move would have to be played instantly. B put one of his rooks upside down on b8, removed his b-pawn, and pressed the clock. With his hands flying nervously all over the board, T knocked his own king over, picked it up and managed to put it on d8, but the clock was already flashing with a row of zeros on Black's side. 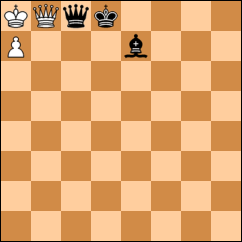 "I seem to have lost on time", he confessed, but all of a sudden recalled what he had learnt in the weekend.
"No, wait, it's a draw because of insufficient material!"
The following conversation was a bit confused. Some spectator argued that a rook upside down is a generally accepted substitute for a queen, while another pointed out that even a rook is sufficient material. Meanwhile, T tried to explain that since no sequence of legal moves can lead from the current position to one where the black king is checkmated, the game is drawn even though Black's flag has fallen.
They were interrupted by G, the problemist. "I'll be darned! Gentlemen..."
As he spoke, he swiftly turned the rook on b8 back to its normal orientation and, as the club's chairperson S had joined the group, continued:
"...and ladies, this moment goes to history. For centuries, problemists and study composers have thought that the only motives for promotion to rook or bishop are forcing or avoiding stalemate. But tonight our friend B has demonstrated, with his extraordinary 66:th move, that there is another motive: retaining sufficient material." 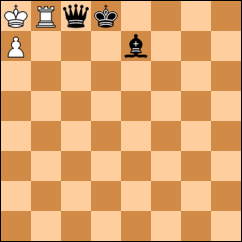 "In the final position, with White to move after Black overstepping time, White has sufficient material because on the forced continuation 67. Rxc8+, Black has the legal move 67. - Kd7 after which he can in principle be checkmated. Had the rook on b8 been a queen, the only legal continuation would have been 67. Qxc8+ Kxc8 stalemate, and therefore 66. - Kd8 would have ended the game. The manoeuver Be7 - Kd8 was brilliant too, and would have saved the game against..."
"I don't quite follow", said B, eager to get some coffee and gossip about the other games of the evening, "but in any case the position is dead drawn, everyone can see that."
With those words he shook T's hand, signed the protocol saying 1/2-1/2, and went to the analysis room, unaware of his unique contribution to chess history.
Epilogue
As the problemist G realized later that evening, there is yet another motive for under-promotion, that of forcing insufficient material. A while later, he published a strange little chess problem, clearly inspired by that evening's events: 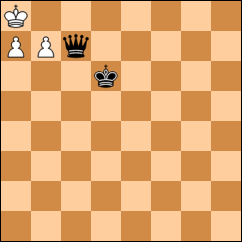 The task was unusual: Draw in 1 move.
Acknowledgments
This story was inspired by the wonderful people and events that happened or might have happened at the chess club LASS, Linköping, around ten years ago. While there is no clear correspondence between characters and real people, similarities might not be entirely accidental. Another source of inspiration was a blog post of Bo Sjögren (another former LASS player). Many other examples of under-promotion can be found among the wonderful Chess Curiosities of Tim Krabbé.
Upplagd av Olle Häggström kl. 07:15 6 kommentarer: Every few decades, an unknown author brings out a book of such depth, clarity, range, wit, beauty and originality that it is recognized at once as a major literary event.

Hofstadter hasn’t been to an artificial-intelligence conference in 30 years. “There’s no communication between me and these people,” he says of his AI peers. “None. Zero. I don’t want to talk to colleagues that I find very, very intransigent and hard to convince of anything. You know, I call them colleagues, but they’re almost not colleagues—we can’t speak to each other.”

Hofstadter strikes me as difficult, in a quiet way. He is kind, but he doesn’t do the thing that easy conversationalists do, that well-liked teachers do, which is to take the best of what you’ve said—to work you into their thinking as an indispensable ally, as though their point ultimately depends on your contribution. I remember sitting in on a roundtable discussion that Hofstadter and his students were having and thinking of how little I saw his mind change. He seemed to be seeking consensus. The discussion had begun as an e-mail that he had sent out to a large list of correspondents; he seemed keenest on the replies that were keenest on him.

I think what I am really concerned about, after having read Ray’s most recent book, and been very impressed with many of the arguments in it, I ask the question: How realistic is this? I have asked a number of friends, highly informed intellectual people of different disciplines, and I have heard reactions over the following range: “The ideas are nutty—not worth the time of day.” “The ideas are very, very scary.” “I don’t know. I just don’t know.” “They are reasonable, or they are probable.” But none of these people have read the book.

This is very interesting to me. What I find strange about this is that I get the feeling the scientific world is not taking any of this seriously. In other words, I do not see serious discussions of this among physicists when they get together.

I would like to hear serious scientists taking these ideas seriously and giving a serious skeptical response—not that I necessarily want it to be the other side. I want the debate to be very seriously taken. I think this is all to Ray’s credit. He has raised some terribly important issues.

There is not the slightest reason to believe in a coming singularity. The fact that you can visualize a future in your imagination is not evidence that it is likely or even possible. Look at domed cities, jet-pack commuting, underwater cities, mile-high buildings, and nuclear-powered automobiles--all staples of futuristic fantasies when I was a child that have never arrived. Sheer processing power is not a pixie dust that magically solves all your problems.

My reactions to the first thirty-odd pages [of Chalmers (2010)] did not change my mind about the topic, aside from provoking the following judgment, perhaps worth passing along: thinking about the Singularity is a singularly imprudent pastime, in spite of its air of cautious foresight, since it deflects our attention away from a much, much more serious threat, which is already upon us, and shows no sign of being an idle fantasy: we are becoming, or have become, enslaved by something much less wonderful than the Singularity: the internet.

But brain's got tricks itself, you see
To get the bang but not the bite
I got this here vasectomy
My genes can fuck themselves tonight