In yesterday's blog post, I offered (links to) some very good reasons why it would be a bad idea to elect Donald Trump US president in November. My sources were highly mainstream, and probably already familiar to many of my readers and all US presidential election zealots. Today I offer links to thoughts about the frightening possibility of a Trump presidency by three highly intelligent and wise thinkers who are less mainstream. They belong not to the usual circle of politicians, political pundits and journalists, but rather to the kind of loosely knit math/physics/CS/AI/futurology community that I consider myself to be part of. In my opinion, all three raise interesting points that deserve further spread:
Upplagd av Olle Häggström kl. 08:15 1 kommentar:

Here's my view on the US presidential election this year. I accept that there are major differences between Donald Trump and Hillary Clinton on concrete issues. For instance, Clinton does not plan to erect a great wall along the Mexican border, and she does not dismiss global warming as a hoax "created by and for the Chinese in order to make U.S. manufacturing non-competitive". These differences, and others, are important. Still, I think the most important issue of all for US voters to consider this fall is that of whether Donald Trump's temperament and moral character make him fit for presidency. And the answer is a clear and overwhelming no.
Much has been said about Donald Trump's performance during Monday's presidential debate with Clinton. It was repugnant, of course. Yet, as Adam Gopnik pointed out in The New Yorker, "The problem with Trump isn't his debating skills". His performance in Monday's debate...

wasn’t a question of preparation. It was that the things he actually believes are themselves repellent even when coherently presented. This was not a bad performance. This is a bad man.

A bad man he is. And cruel. See the examples listed by Conor Friedersdorf in his recent piece in The Atlantic on Trump's cruel streak of willfully inflicting pain and humiliation on others. Or consider his reaction to the 2006 housing collapse. Here's Vice President Joe Biden's measured response to that:
Trump may claim that his temperament is suitable for presidency, but even when he does so, as he did on Monday, the way he delivers this message becomes such a clear demonstration of its negation that it hardly requires a response:
A key question that every US voter ought to ask herself is this: Should a man as utterly devoid of compassion, decency and self-control as Donald Trump be put in charge of the world's biggest nuclear arsenal? Watch Stanley Kubrick's 1964 classic Dr Strangelove, and consider whether it would be a good idea to gamble the future survival of the human race on Trump's ability to handle conversations like this one:
Upplagd av Olle Häggström kl. 09:30 5 kommentarer:

Brett Hall tells us not to worry about AI Armageddon

When the development of artificial intelligence (AI) produces a machine whose level of general intelligence exceeds that of humans, we can no longer count on remaining in control. Depending on whether or not the machine has goals and values that prioritize human welfare, this may pose an existential risk to humanity, so we'd better see to it that such an AI breakthrough comes out favorably. This is the core message in Nick Bostrom's 2014 book Superintelligence, which I strongly recommend. In my own 2016 book Here Be Dragons, I spend many pages discussing Bostrom's arguments, and find them, although not conclusive, sufficiently compelling to warrant taking them very seriously.
Many scholars disagree, and feel that superintelligent AI as a threat to humanity is such an unlikely scenario that it is not worth taking seriously. Few of them bother to spell out their arguments in any detail, however, and in cases where they do, the arguments tend not to hold water; in Here Be Dragons I treat, among others, those of David Deutsch, Steven Pinker, John Searle and David Sumpter. This situation is unsatisfactory. As I say on p 126 of Here Be Dragons:

There may well be good reasons for thinking that a dangerous intelligence explosion of the kind outlined by Bostrom is either impossible or at least so unlikely that there is no need for concern about it. The literature on the future of AI is, however, short on such reasons, despite the fact that there seems to be no shortage of thinkers who consider concern for a dangerous intelligence explosion silly [...]. Some of these thinkers ought to pull themselves together and write down their arguments as carefully and coherently as they can. That would be a very valuable contribution to the futurology of emerging technologies, provided their arguments are a good deal better than Searle's.

One of these AI Armageddon skeptics is computer scientist Thore Husfeldt, whom I hold in high regard, despite his not having spelled out his arguments for the AI-Armageddon-is-nothing-to-worry-about position to my satisfaction. So when, recently, he pointed me to a blog by Australian polymath Brett Hall, containing, in Thore's words, "a 6-part piece on Superintelligence that is well written and close to my own view" (Part 1, Part 2, Part 3, Part 4, Part 5, Part 6), I jumped on it. Maybe here would be the much sought-for "good reasons for thinking that a dangerous intelligence explosion of the kind outlined by Bostrom is either impossible or at least so unlikely that there is no need for concern about it"!
Hall's essay turns out to be interesting and partly enjoyable, but ultimately disappointing. It begins with a beautiful parabole (for which he gives credit to David Deutsch) about a fictious frenzy for heavier-than-air flight in ancient Greece, similar in amusing respects to what he thinks is an AI hype today.1 From there, however, the text goes steadily downhill, all the way to the ridiculous crescendo in the final paragraph, in which any concern about the possibility of a superintelligent machine having goal and motivations that fail to be well aligned with the quest for human welfare is dismissed as "just racism". Here are just a few of the many misconceptions and non sequiturs by Hall that we encounter along the way:
Footnote
1) Here his how that story begins:

Imagine you were a budding aviator of ancient Greece living sometime around 300BC. No one has yet come close to producing "heavier than air" flight and so you are engaged in an ongoing debate about the imminence of this (as yet fictional) mode of transportation for humans. In your camp (let us call them the "theorists") it was argued that whatever it took to fly must be a soluble problem: after all, living creatures of such a variety of kinds demonstrated that very ability - birds, insects, some mammals. Further, so you argued, we had huge gaps in our understanding of flight. Indeed - it seemed we did not know the first thing about it (aside from the fact it had to be possible). This claim was made by you and the theorists, as thus far in their attempt to fly humans had only ever experienced falling. Perhaps, you suggested, these flying animals about us had something in common? You did not know (yet) what. But that knowledge was there to be had somewhere - it had to be - and perhaps when it was discovered everyone would say: oh, how did we ever miss that?

Despite how reasonable the theorists seemed, and how little content their claims contained there was another camp: the builders. It had been noticed that the best flying things were the things that flew the highest. It seemed obvious: more height was the key. Small things flew close to the ground - but big things like eagles soared very high indeed. A human - who was bigger still, clearly needed more height. Proposals based on this simple assumption were funded and the race was on: ever higher towers began to be constructed. The theory: a crucial “turning point” would be reached where suddenly, somehow, a human at some height (perhaps even the whole tower itself) would lift into the air. Builders who made the strongest claims about the imminence of heavier than air flight had many followers - some of them terribly agitated to the point of despondence at the imminent danger of "spontaneous lift". The "existential threat could not be overlooked!" they cried. What about when the whole tower lifts itself into the air, carrying the Earth itself into space? What then? We must be cautious. Perhaps we should limit the building of towers. Perhaps even asking questions about flight was itself dangerous. Perhaps, somewhere, sometime, researchers with no oversight would construct a tower in secret and one day we would suddenly all find ourselves accelerating skyward before anyone had a chance to react.

Read the rest of the story here. I must protest, however, that the analogy between tower-building and the quest for faster and (in other simple respects such as memory size per square inch) more powerful hardware is a bit of a straw man. No serious AI futurologist thinks that Moore's law in itself will lead to superintelligence.
Upplagd av Olle Häggström kl. 15:45 2 kommentarer: 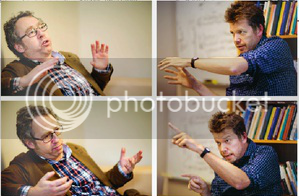